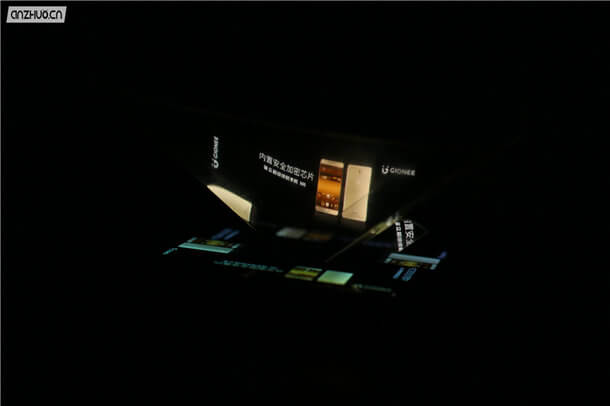 In China on conference, Gionee has recently announced several new flagship phones including M6 and M6 Plus with emphasis on “super endurance – core fearless” features. For the upcoming conference at the Beijing National Convention Center where this smartphones will be introduced all visitors and guests have received really interesting invitations.

The invitation is mystery because it is packed in a cool movie playing board. The invitation announced the launch of the new Gionee smartphones, where the conference will be held on July 26. Inside movie playing bord you can find a transparent movie ticket with instructions which are actually really simple.

As you can see from photos you’ll need to put holographic film model on the top of the phone screen, and also you will need to turn off the lights. After you do that you will see 30 seconds of the new movie including M6 / M6 Plus commercial parts. Except this models, Gionee has also unveiled S6 Pro and W909 with main features which are “Internet + Share Smart Future” including the super battery life as a major selling point. So from what we can see Gionee W909 is dual flip smartphone with all-metal double shaft engages to pass all durability tests. W909 is also equipped with two HD screens, which are using 2.5D arc glass cover. From other information we can tell you that is equipped with a full metal plating vacuum relief button. So you can see that this confirms Gionee earlier development strategy of high-end mobile phones.