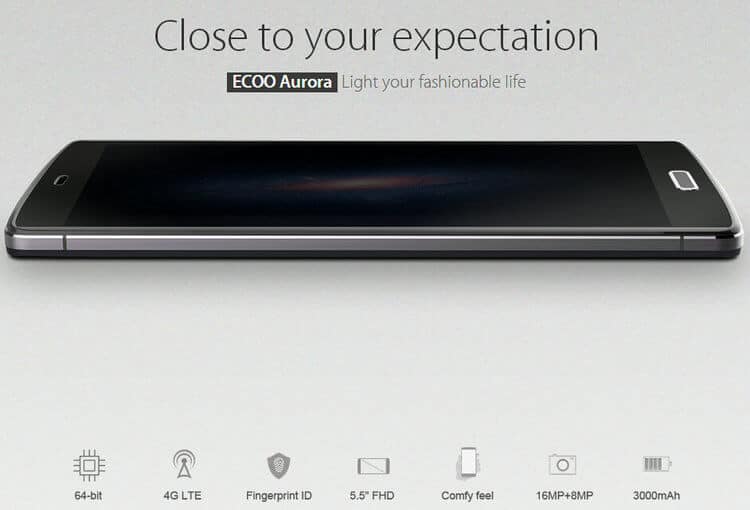 If you’re looking for smartphone under 200 dollars then these three Android devices: ECOO E04, Jiayu S3 and Cubot X9 are very good in this price range. So first I will write about ECOO E04. This Chinese company is a relatively new and their new model is very interesting because of powerful hardware.

It has 64-bit octa-core LTE SOC MediaTek MT6752 with 2 GB of RAM and 16 GB internal memory. From other information it has 5.5 inch FHD IPS 2.5D Arc Screen. 2.5D Arc is Tempered-Glass Screen protection with the 9H hardness. It has also 16 megapixel primary camera and 8 megapixel front facing camera. From other features it supports 4G LTE, Fingerprint ID function and other functions like Wi-Fi, Bluetooth and GPS. According to the ECOO it has also very strong battery with capacity of 3000 mAh. Overall ECOO E04 has really nice design with2.5mm narrow frame. If you decide to buy it, the regular price is $189.99 and I have for you prepared coupon: 1949deal2013 which gives you a additionally $5 off. You can purchase ECOO E04 here using a coupon.

Jiayu S3 is another smartphone under 200 dollars which almost has the same hardware as ECOO E04. So it has built in MediaTek MT6752 with 2 GB of RAM and also with 16 GB internal memory. It has also 5.5 inch full HD display with Gorilla Glass protection. The only difference between ECOO E04 and Jiayu S3 is in the camera because S3 has 13 megapixel primary camera while the ECOO has 16 megapixel camera. If you like more this Android smartphone then the regular price is $189.98. Also I have coupon code: 1949deal2013 for $5 discount. You can buy Jiayu S3 here with coupon. If you don’t have enough money for this listed devices then you can check Cubot X9. This smartphone is selling at price $135.69. And at the same time it has just slightly weaker hardware. It has built in MediaTek MT6592M Octa Core CPU at speed 1.4 GHz. It has also 2 GB of RAM with 16GB internal memory.

If you haven’t maybe noticed this is a iPhone 6 clone. It has really solid hardware as can see. But also it has 5 inch HD display. Talking about camera it has 8 megapixel primary camera while the front facing camera is 5 megapixel. So if you want to buy Cubot X9, as I said in the beginning regularly price is $135.69 which you can buy it using the coupon code: 1949deal0808 which gives you a additionally $3 off and you can buy it here at 1949deal.