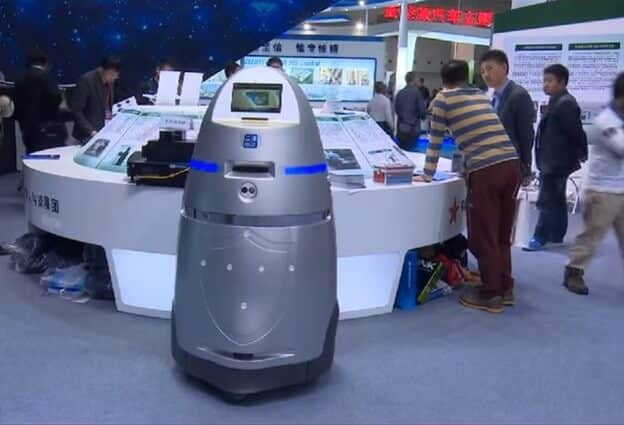 The first robot designed for the preservation of public order debuted at the fair in Chongqing. The robot was developed by the Chinese National University of Defense, and Chinese media say they have built into it a number of technology solutions for law enforcement purposes, including low-cost autonomous navigation and intelligent analysis of the video, which plays an important role in fighting the most populous country in the world against terrorism and street riots and rebellion.

Anbot its oval shape is reminiscent of the great Russian babushkas, is 1.49 meters tall, weighs 78 kg and has a diameter of 0.8 m, as you can see in this video.

It can move a maximum speed of 18 km / h, while a standard speed patrol is 1 km / h. They say it is equipped with sensors that mimic human brain, eyes and ears, and is capable of autonomous work for 8 hours.

They state that is able to autonomously patrol, and even carry out arrests, and if people close to create a security threat, the operator who controls his work can take over the management and use against rioters electrical weapon (probably some kind of a Taser), although so far we do not know how works and looks.

Nevertheless, the robot itself has a SOS button so people can pressure him to call the police (human) in case of need.

Welcome to China, the first country with a police robot that will shake you with electricity if you’re naughty. Only thing we don’t know whether Anbot can use nightstick.