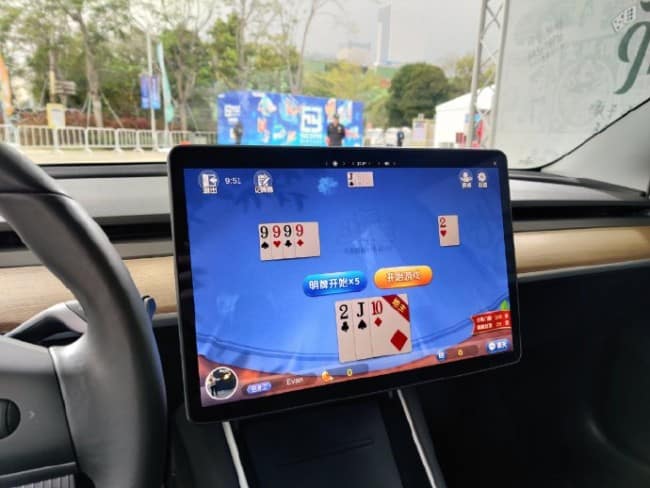 The Tesla Arcade feature is one of the most intriguing points on the Tesla vehicle’s touchscreen console. The arcade lets people play various games on the console while the Tesla vehicle is recharging. Tesla Arcade supports many games from new ones to classics like Missile Command and Asteroids.

The arcade feature is useful for people who want something to do while charging a battery. The point comes as it takes a while to charge the power source.

Details on the specific games that will be available are unknown right now. The traditional Chinese game mahjong will likely make an appearance. A poker game may also arrive in the future.

Poker has become very popular throughout the world, including in China. The Tesla Arcade should have a poker game in China soon. There is a potential that this update will eventually reach other Tesla vehicles around the world.

No one knows right now what specific poker style the Tesla Arcade will feature. But the Texas Hold’em and Omaha styles are the two most popular ones available today. Either of these formats may feature in the Tesla Arcade console system.

Anyone looking to play one of these games might benefit from understanding the rules. Let’s look at what makes these two games different. The basic principles are consistent, but the ways how people can play their cards will vary.

First, let’s look at how Omaha poker works. Each player at a table will receive four cards. These are called hole cards, and each player keeps them a secret from the others at the table.

Each player will then place bets on whether they will have the best hand in the round. After that, the dealer will display the first card in the flop. The flop has five cards that each player can use alongside the cards in a hole. The dealer will reveal the flop one card at a time. Each player will then choose to add another bet to the pot or to fold and leave the round. The process repeats with each revealed card.

Any players that are left after all five flop cards are visible will have to take two hole cards and three flop cards and then make the best possible poker hand. The key is for a player to figure out which cards in one’s hole are the most valuable. The player must also determine what possible hands might come about based on what the flop may feature. While a person might have four useful cards in the hole, that player can only use two of those cards.

Texas Hold’em poker uses a similar betting structure with players placing bets in the pot at the start and between each flop card. Players can also fold if they feel they will not win anything. But there are a few things that make this different from Omaha poker.

Poker has become very popular in China. It won’t be a surprise if the Tesla Arcade update in China features a poker game. The game could spread to other countries as well. The question here would be which poker type will appear.

Soap, Gambling, and Stimulus Checks: Online Betting is on the Rise

Top 5 Fitness Apps for Android to Look For in 2020