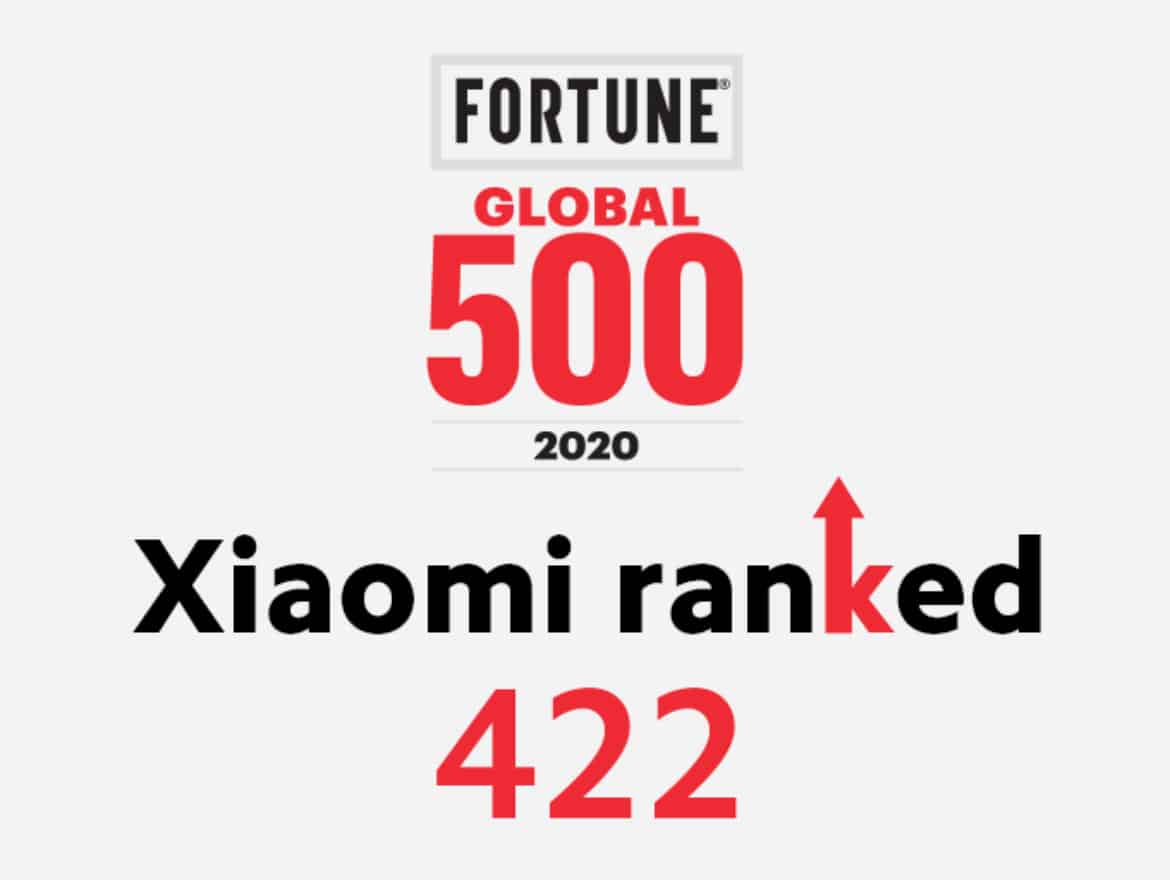 Xiaomi Corporation (“Xiaomi” or the “Group”; Stock Code: 1810:Hong Kong) announced today that the company ranks 422nd on the Fortune Global 500 list for 2020, a decade after its iteration.

This marks the second consecutive year that the global technology leader stays on the list. It was the youngest company on the list for 2019, ranked No. 468.

“This year marks the 10th anniversary of Xiaomi’s foundation. Looking back at the past decade, Xiaomi would not have achieved the success it enjoys today without cordial and unwavering support from our nearly 19,000 colleagues worldwide, Mi Fans, users, business partners and friends,” said Lei Jun, Founder, Chairman and CEO of Xiaomi.

“In the unusual year of 2020, when our lives are all deeply impacted by various radical changes, I would all the more want everyone of you to accept my gratitude and appreciation during these difficult times. I would also like to take this chance to accentuate our commitment to continuously making and introducing amazing innovative products, at the most accessible and honest pricing points, to every Mi Fan and user at every corner of the world,” he added.

As an internet company with smartphones and smart hardware connected by an Internet of Things (IoT) platform at its core founded in April 2010, Xiaomi was also named to Fortune’s China 500 list again in July, ranking 50th, up three slots from 53rd last year. The company is at No. 24 among the world’s 50 most innovative companies of 2020 by Boston Consulting Group, and at No. 384 on Forbes Global 2000 list for 2020.

Xiaomi continues to demonstrate its healthy consumer brand equity and strong growth potential, thanks to the company’s unique “triathlon” business model, and the results of its forerunning position in the 5G era.

According to international market research organization IDC, as of June 2020, Xiaomi remained the world’s 4th smartphone brand in terms of shipment sales volume. The company has also incubated and invested in over 200 ecosystem companies, many of which are specialized in developing smart hardware, and thus built the world’s largest consumer IoT platform with approximately 252 million connected smart hardware, excluding smartphones and laptops, by late March 2020.

Since Xiaomi’s global expansion journey started some 6 years ago, as of June 2020, in terms of shipments, Xiaomi was among top five in 50 markets, of the 90 global markets where the company is officially present, according to international market research organization Canalys.

“In our global markets, we have observed good results during the year till now, and by the first quarter of 2020, we for the first time witnessed our overseas revenue from our global markets account for half of the company’s overall. We have been focusing our resources and talents on our global expansion journey, which we started six years ago, and fulfilling our mission of letting everyone in the world enjoy the best possible innovative products,” said Chew Shou Zi, President of International, Xiaomi.

“Impacts from the pandemic were felt in the first few months of this year, but as lockdown measures are gradually loosened, we see a robust rebound thanks to our efforts taken on securing the manufacturing and supply chain, working closely with our global partners, as well as living up to the potential of our omnichannel online-offline retail system,” he added.

According to IDC, as of the second quarter of 2020, Xiaomi had been the largest smartphone brand in India by shipments for the 12th consecutive quarter, or a 29.4% market share.

Xiaomi is also dedicated to building and expanding its highly efficient new retail network, which incorporates both online and offline channels, in overseas markets. As of June 30, 2019, there were 520 authorized Mi Home stores overseas, representing a 92.6 percent year-on-year growth.

At the start of 2020, Xiaomi fine tuned its overarching strategy from “Smartphone+AIoT” to “5G+AI+IoT and next generation super internet”, by investing at least RMB 50 billion over the five years in “5G+AIoT” to double down on their lead in the field. 5G is not solely about a faster smartphone network. “5G+AIoT” represents Xiaomi’s ability to offer services across their comprehensive product line. It gives them the chance to offer unique and pioneering AIoT use cases. The strategy perfectly fits the company’s Internet DNA to ensure it wins in this new smart era.

The Fortune Global 500, also known as Global 500, is an annual ranking of the top 500 corporations worldwide compiled and published by Fortune magazine for 68 years, as measured by revenue from the previous fiscal year.

The world’s 500 largest companies for 2020 generated US$ 33.3 trillion in revenues and US$ 2.1 trillion in profits in 2019. Together, this year’s companies employ 69.6 million people worldwide and are represented by 32 countries and regions. 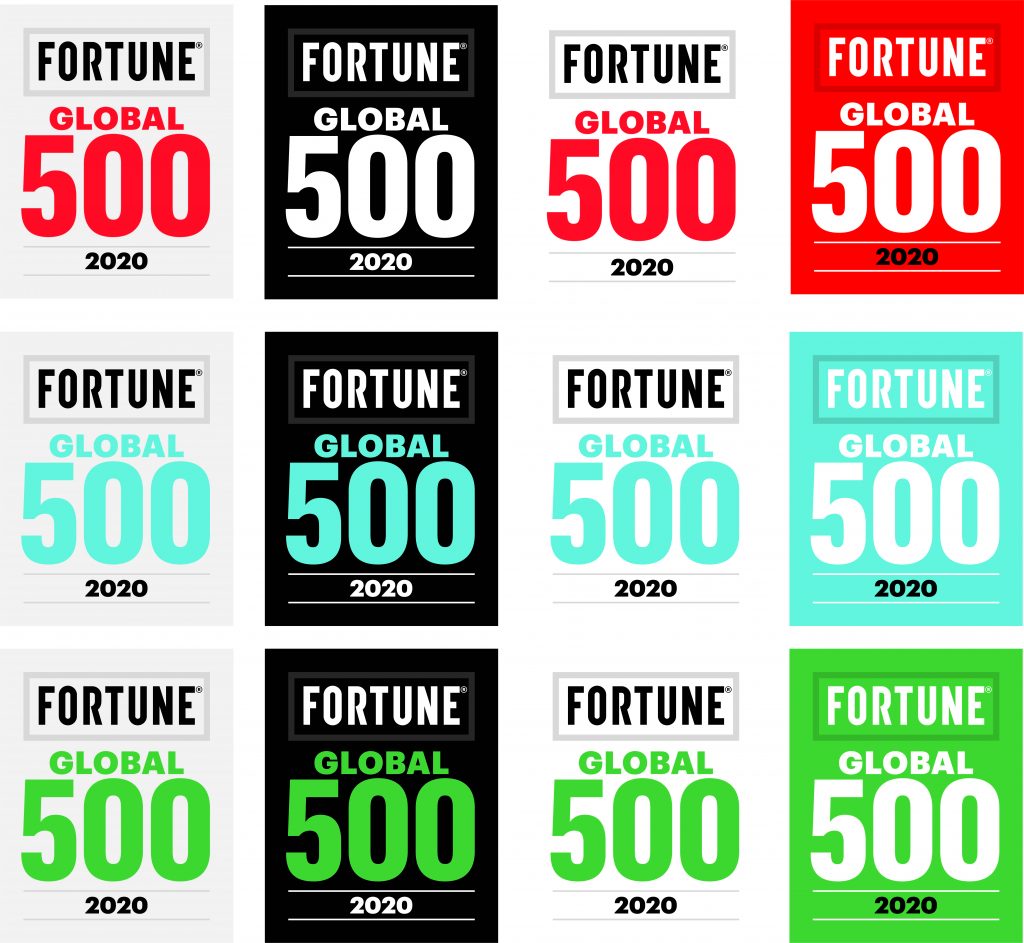 Huawei and Partners Launch the First Batch of 5GtoB Ecosystem