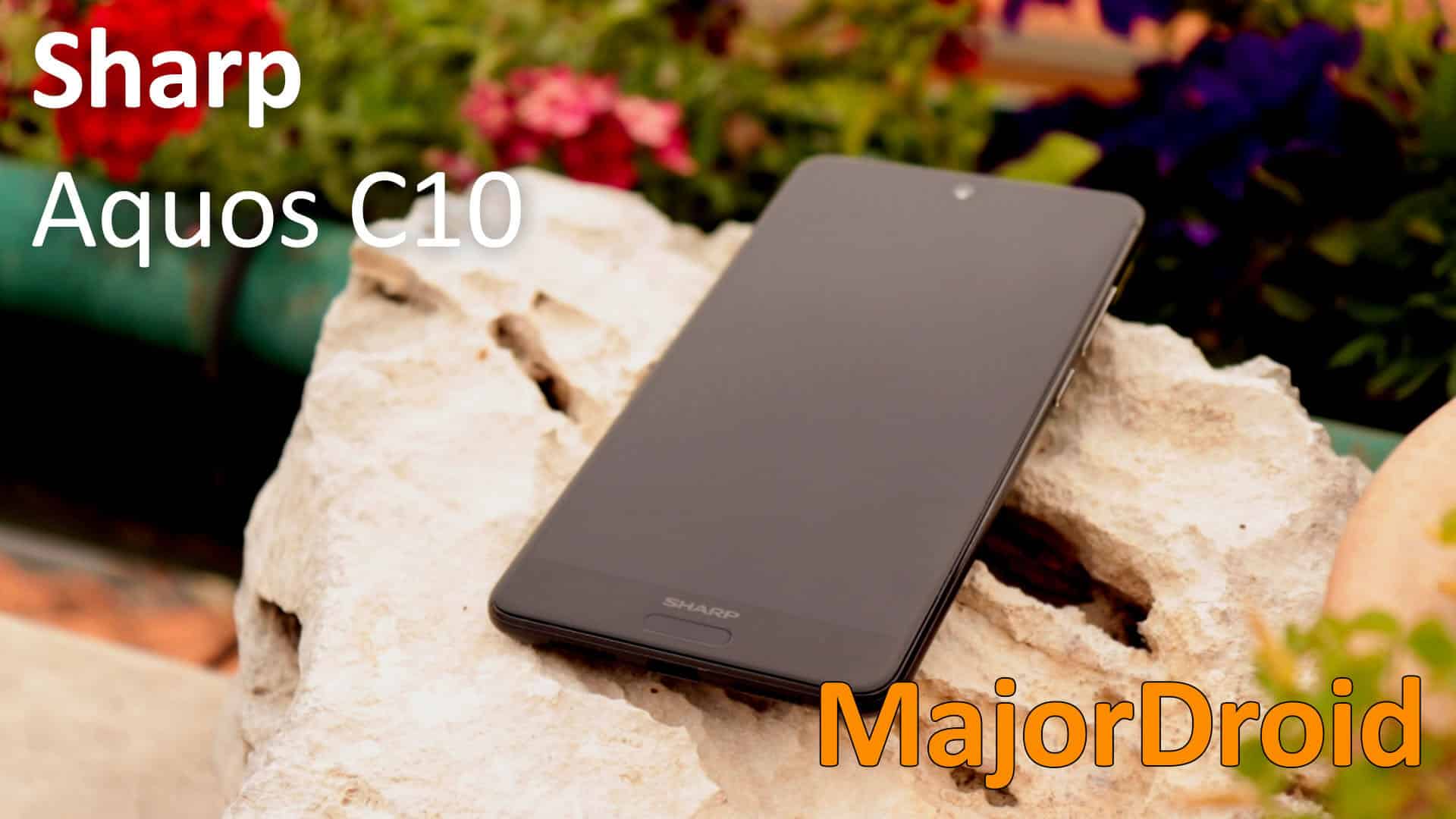 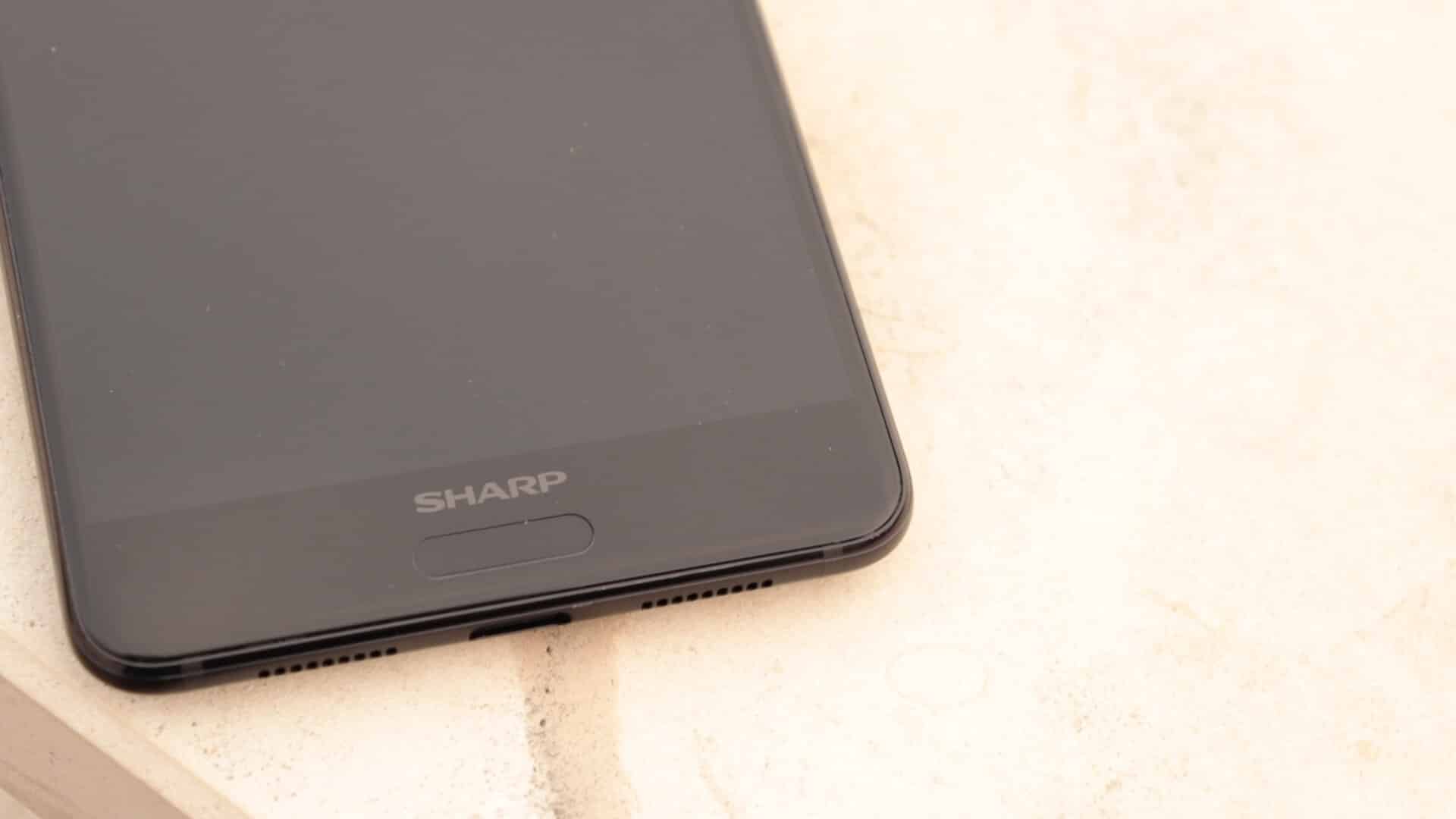 The Sharp C10 review has finally arrived! Sharp is a Japanese brand that mostly covers its market in Japan, but has recently started to turn its marketing to other areas of the world. So yes, Japan is not only popular for Hentai and awesome cars industry but they also get involved in the smartphone industry. Sharp is probably best known for their TVs or kitchen appliances to some, but they are fairly old players in the smartphone game, making phones like the Aquos Crystal back in 2014. Let’s jump back to the C10 and look at all the interesting bits this smartphone hides. 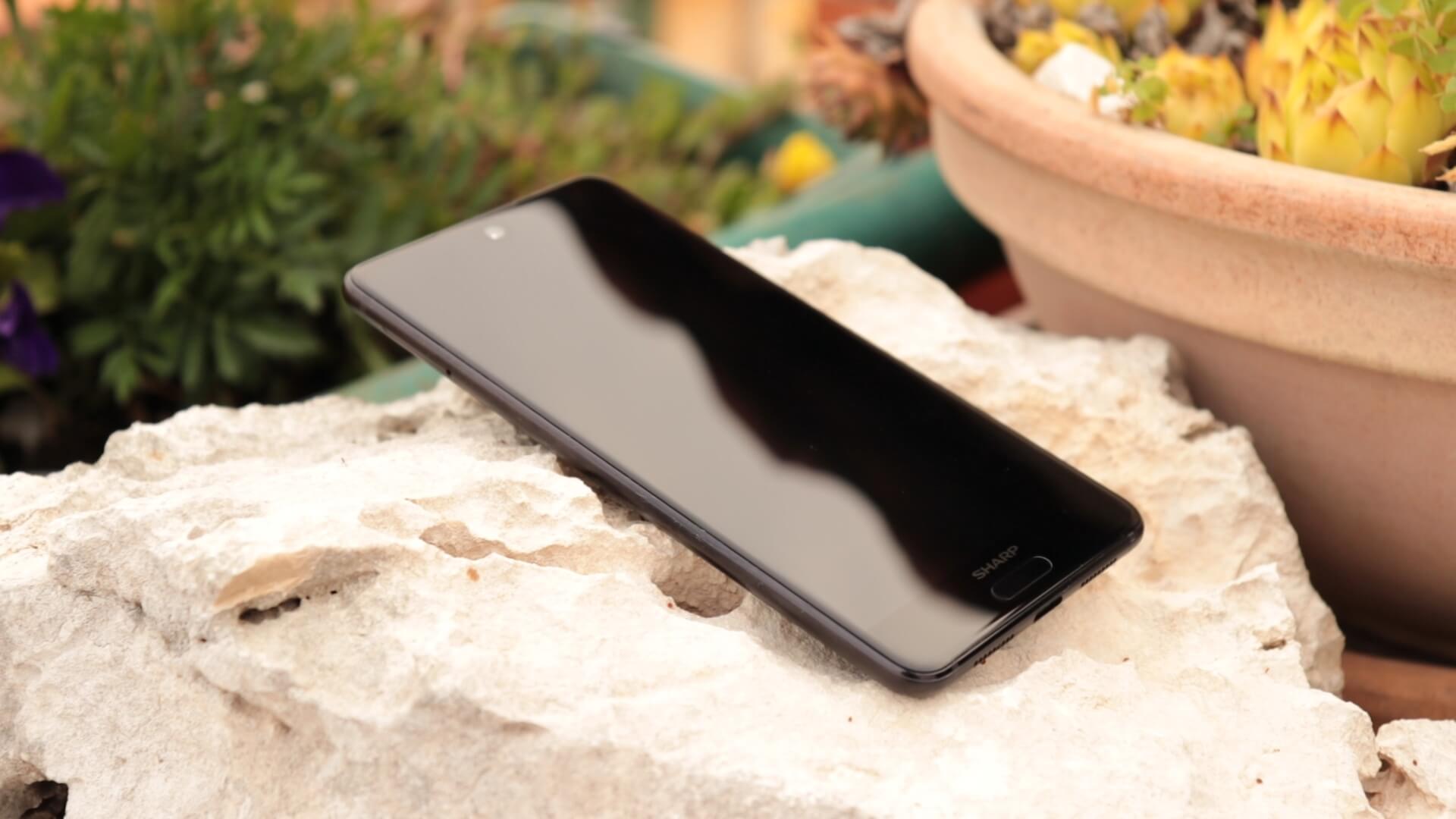 Because of it’s non standard aspect ratio, this phone brings some quite interesting looks with it. It’s a bit shorter and wider than what we’re used to, with a droplet styled notch on the top and glossy plastic back. The USB-C jack lies on the bottom between the speaker and microphone grilles, but unfortunately there is no 3.5mm audio jack on the top which is a huge disappointment. Finally, the very clicky three buttons are positioned on the right side and are pretty easy to reach due to the phone’s size.

The phone itself is fairly light in hand, but it still feels relatively sturdy and rigid. It is claimed to have gorilla Glass protection for the screen, but it’s unknown which version of it exactly. Also, Sharp have decided to put the fingerprint reader on the front, so you get a small recession under the screen where the fingerprint sensor resides. The phone itself is not too thick either, so it’s a real pleasure to handle all in all. 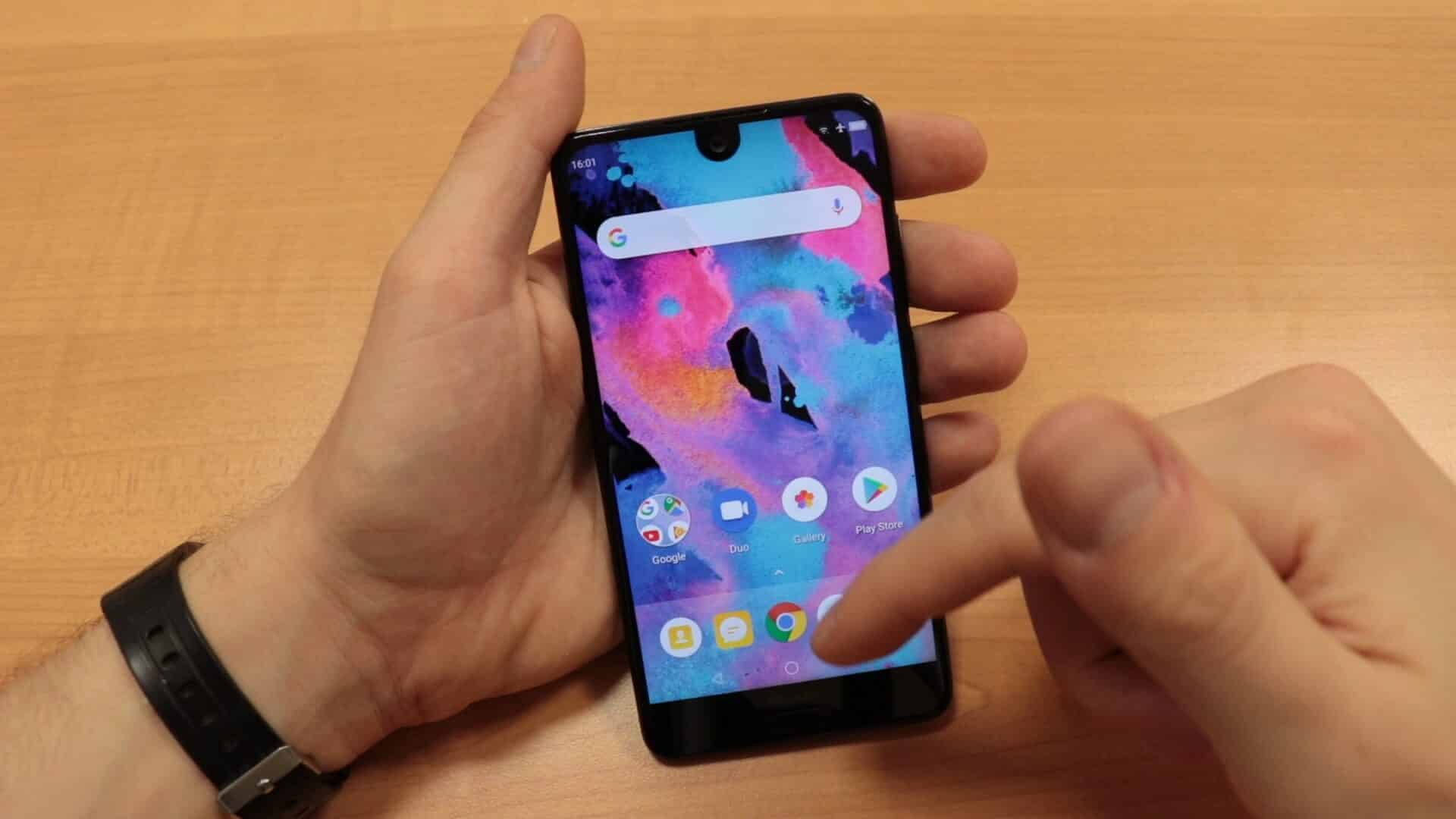 The OS on this thing is actually pretty light with little to no bloat! It’s Android 8.0 Oreo with a few tweaks to the settings application, task switcher, and the system UI to handle the notch and to distinguish it from other Android phones. Notch handling is done on a per-app basis which means that most applications probably won’t support it. I’ve found that only the stock gallery seems to make use of it, while Youtube cuts off the whole top. You can also disable most of the Google applications if you don’t use them, that’ll get you some extra RAM space if you need it. The situation here is fine although they should work on the visual integrity a bit in the future updates. 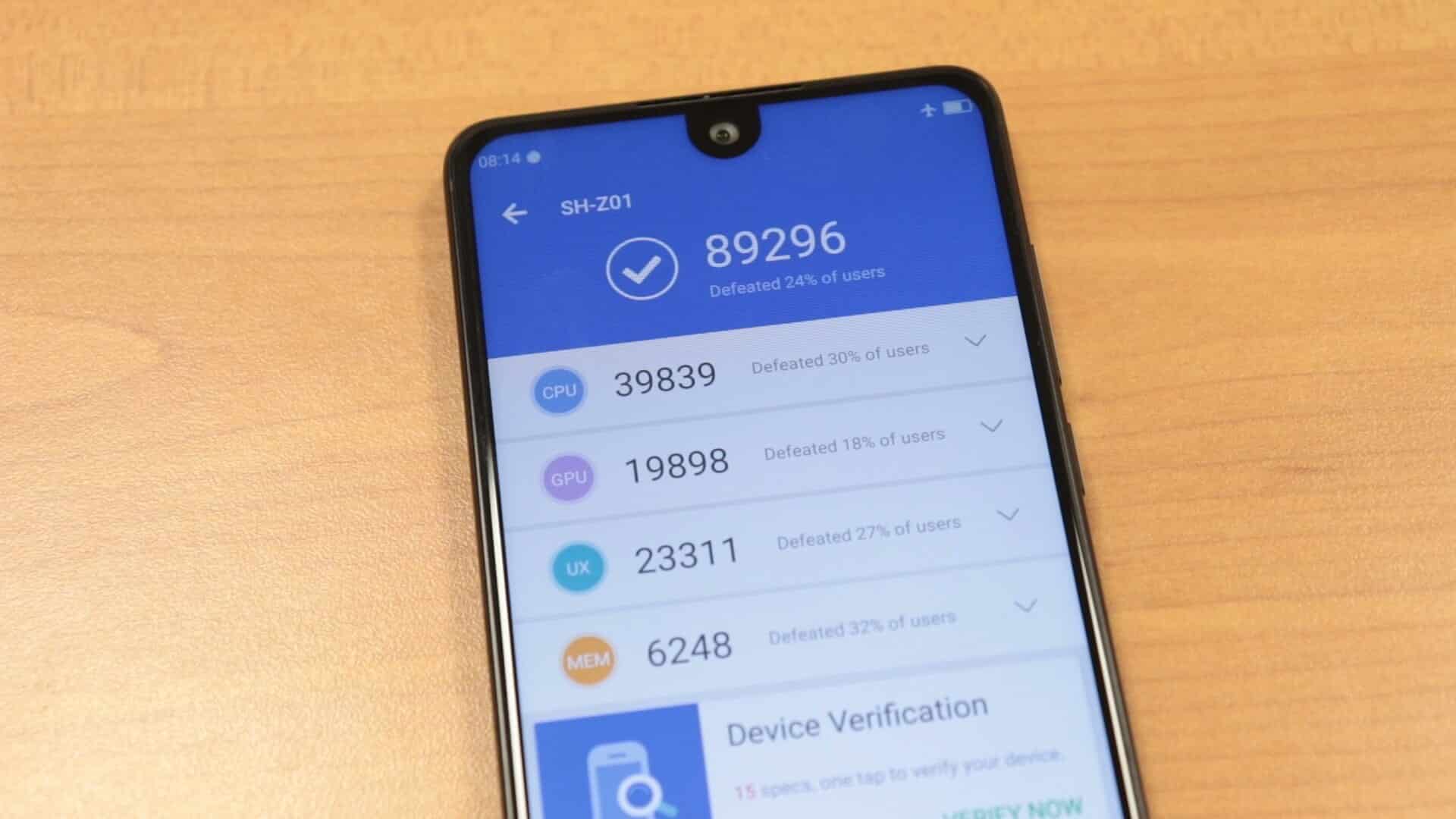 This phone gets 89296 points on Antutu which is not that great for a mid range device. Compared to the Mi A2 which gets 134348 points, performance of the C10 seems pretty bad, but it’s not all that bleak. In Geekbench it gets 883 for the single core test, 4239 for the multi core test and 3702 for the renderscript test. Synthetic benchmarks obviously don’t tell the full story as this device multitasks fairly fast and handles Chrome just fine for day to day web browsing. PUBG Mobile locks the graphics settings to low and even then it stutters here and there, so obviously don’t pick this phone if you’re looking for raw gaming performance. Even then, playing on it’s relatively small screen won’t be too comfortable of an experience. Regarding screens… 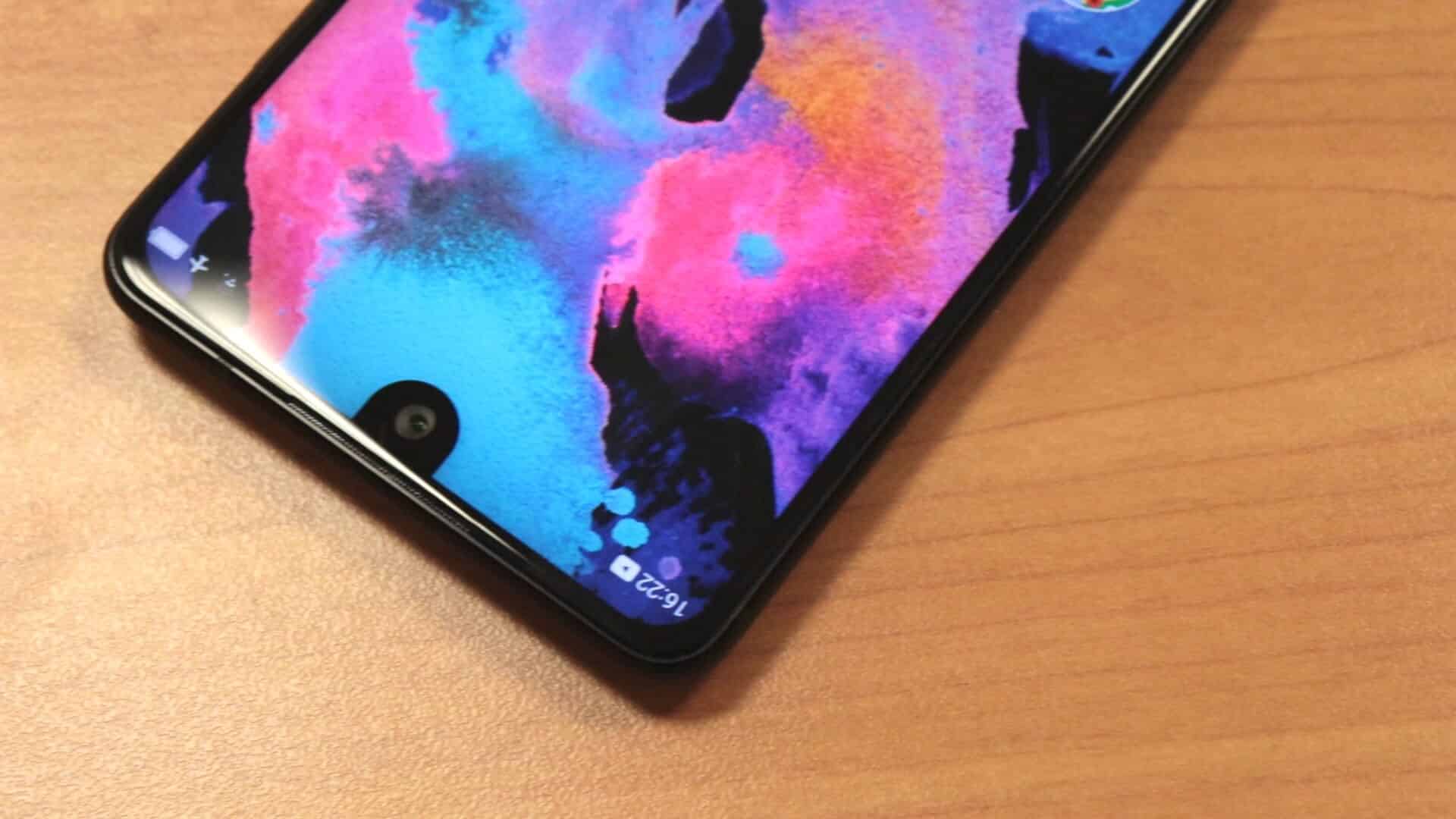 In a mid range phone like this, a screen usually won’t be too interesting of a subject. C10’s screen has some very rounded corners on the top including the notch, while the bottom just has regular, hard corners. You do get a relatively nice FHD+ IPS panel with a resolution of 1080×2040. Colors pop pretty nicely at higher brightness settings, and speaking of brightness this phone handles it pretty well. Lowest brightness doesn’t go too low, but highest brightness is thankfully high enough for outside use. 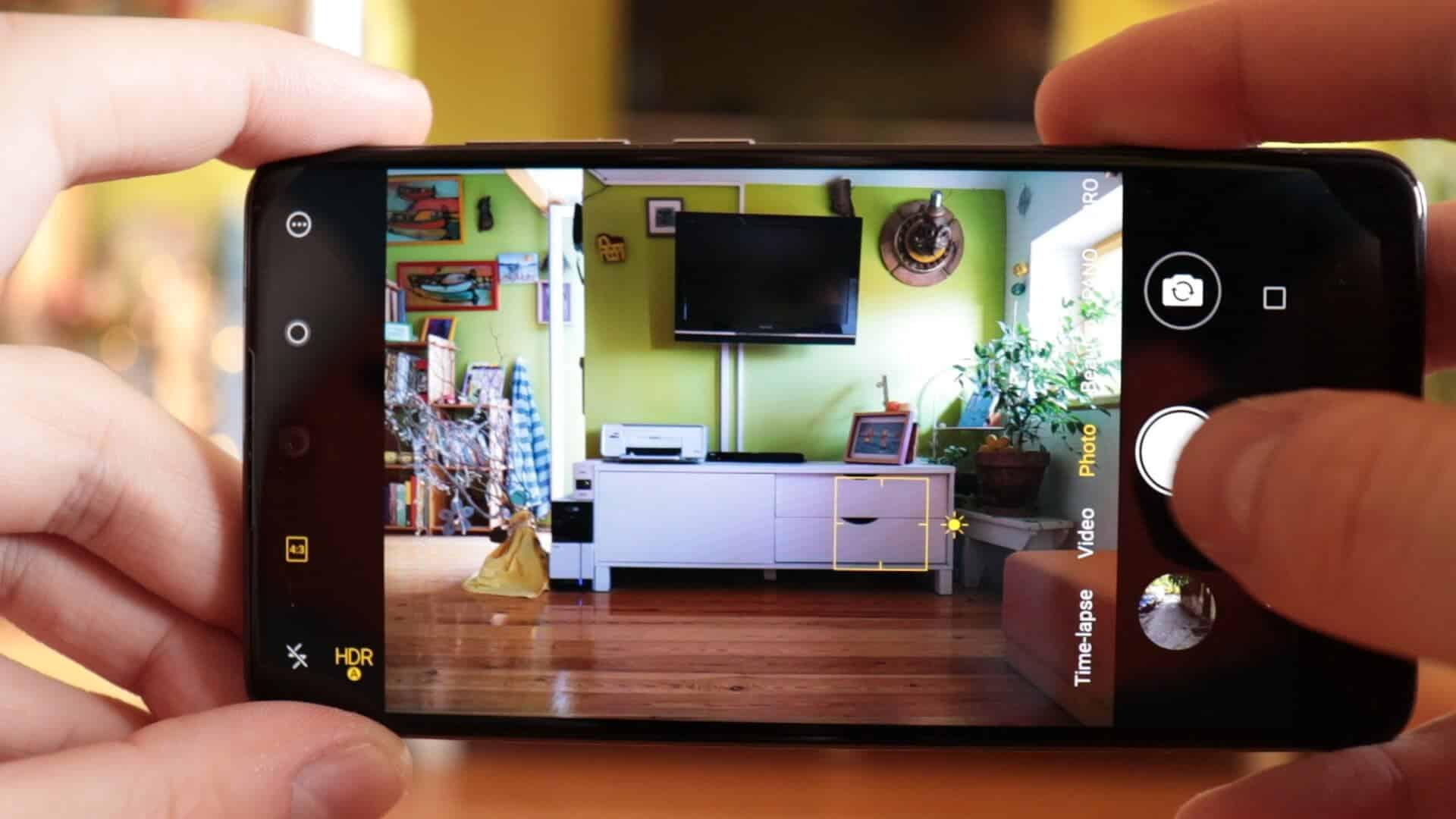 I have to say, this phone has quite an interesting thing going on with the camera. Unfortunately, the second camera is only used for depth detection in portrait mode so I think it’s a bit of an useless addition, but the camera application itself is pretty feature packed. I’m happy to say that it also has a full featured manual mode with only the RAW option missing. The photos it takes on auto mode are lifelike, vibrant and just very pleasant in general. Given it’s wide aperture, it’s also pretty competitive at night, but only with still shots. Portrait mode gets you some pretty strong depth blur, but it’s inaccurate as well so use it in moderation.

Switching over to video, the mild disappointment starts. No stabilization options at all, nor any slow motion modes available. Thankfully it does have 4K, but I don’t think most people will find it very useful. Some EIS would go a long way here. All in all, it’s a pretty competent camera in the price range with some nice software features like the picture-in-picture mode, but the second camera is a bit of a waste, and the addition of EIS would be extremely beneficial. 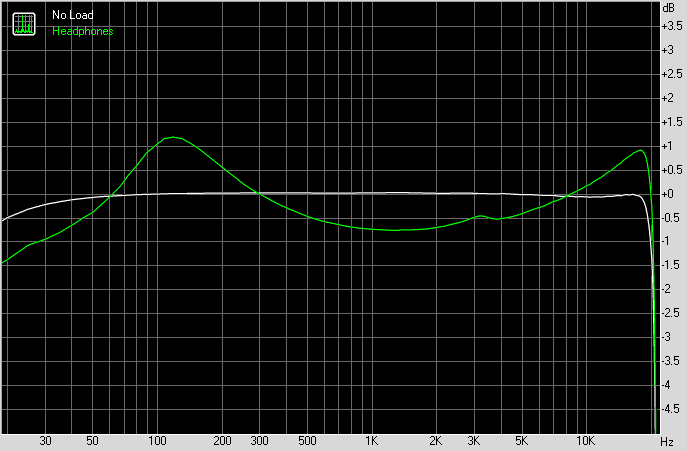 Testing the audio output on this phone yielded some fairly average results. Doing the tests with the headphones connected, we can see that the frequency response loses it’s linearity and some distortion shows up on the low end. The stereo crosstalk also jumps up by almost 40dB with the headphones connected. These tests are done with a 55ohm set of on-ear headphones so results may vary with different loads. The audio output thankfully does get comfortably loud so it does seem to have enough power.

Similar situation for the speaker which gets relatively loud, but it carries some distortion along with it. Nothing tragic but you’ll hear when you’re pushing it. The plastic case doesn’t resonate with the speaker that much so it doesn’t help the tinny feel of the sound. For such a budget phone, I really didn’t expect anything extraordinary from the loudspeaker so I wouldn’t call it a disappointment by any means. 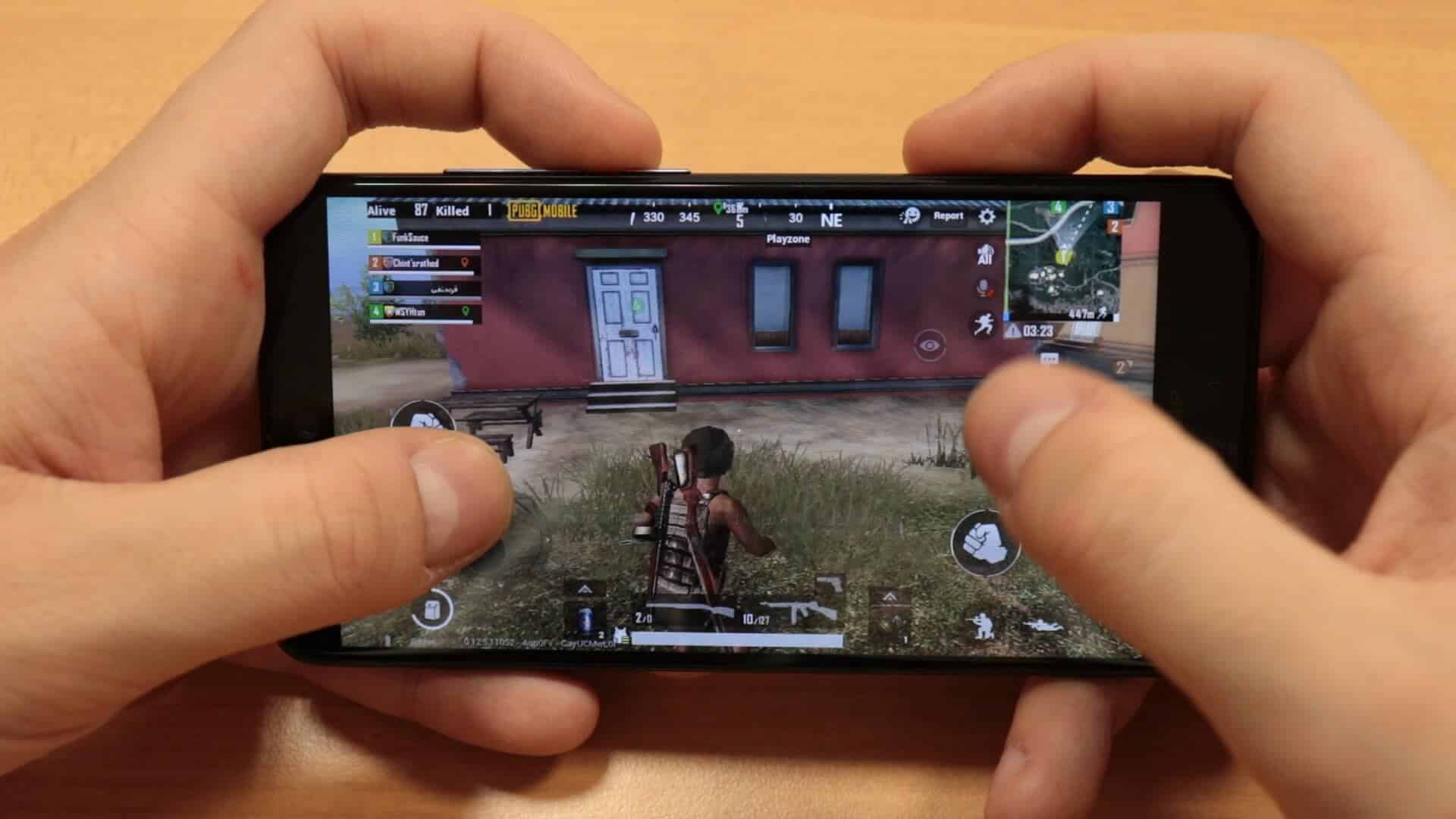 That’s surprisingly good given the relatively small 2700mAh battery inside C10. It’s standby times are even better since the phone shows little drain during the night and could probably last over a week if used sporadically. Suffice to say, I’m pleasantly surprised! 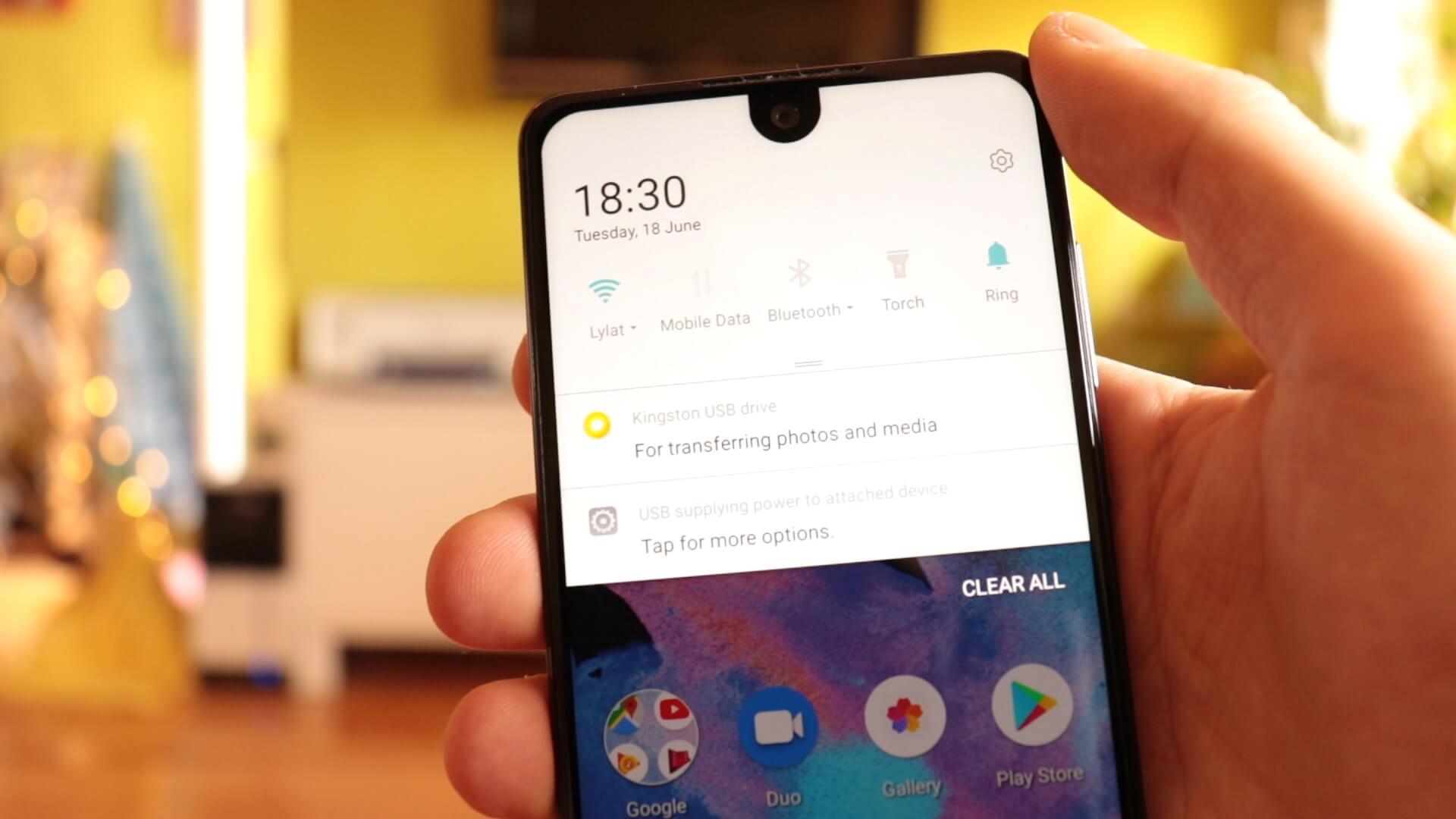 When it comes to additional features, this phone doesn’t pack any surprises. Unfortunately, Sharp has even omitted an FM radio receiver software even though the hardware supports it. There’s no FM radio application to be found anywhere! The fingerprint reader usually unlocks on the second try, but the results can vary and it’s pretty fast when it works.

GPS also hasn’t been proven too spectacular as it took a while to get my location acquired, but it works all right once it locks on the satellites. Finally, there’s full OTG functionality here so you can plug in flash drives and all kinds of other peripherals into your phone. No problem! 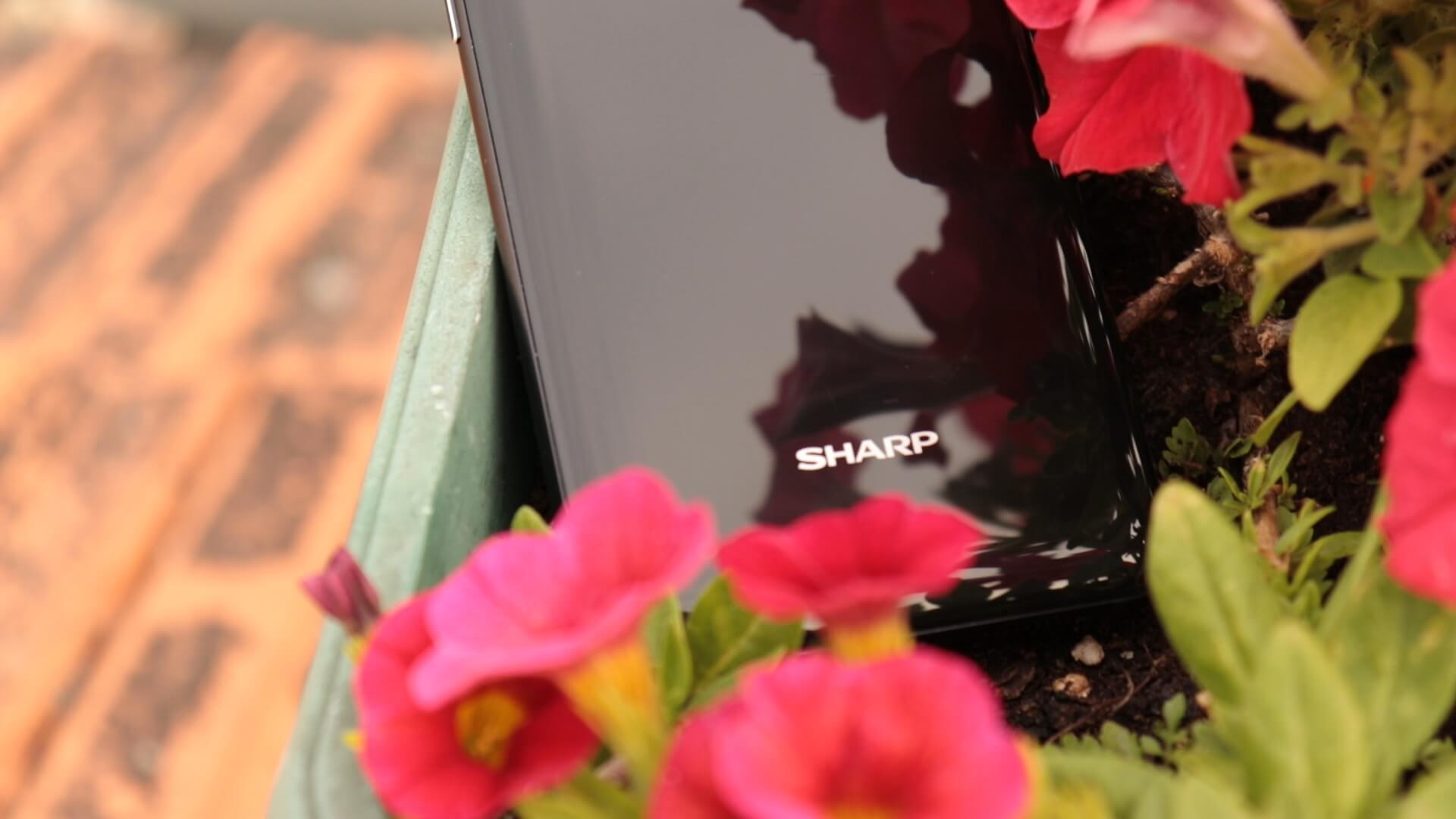 The Sharp C10 is an interesting budget phone with a pretty stern and business-like design. Even though the performance might not be the selling point here, you trade it in for a very respectable camera which I’d say is the highlight of this phone. Unfortunately some bad decisions were made, for example the removal of the 3.5mm jack and the lackluster notch handling, but all in all it could be way worse. In the end, all that matters is preference – what do you want out of your phone and what are you willing to sacrifice.

Redmi 8 Was Launched In India