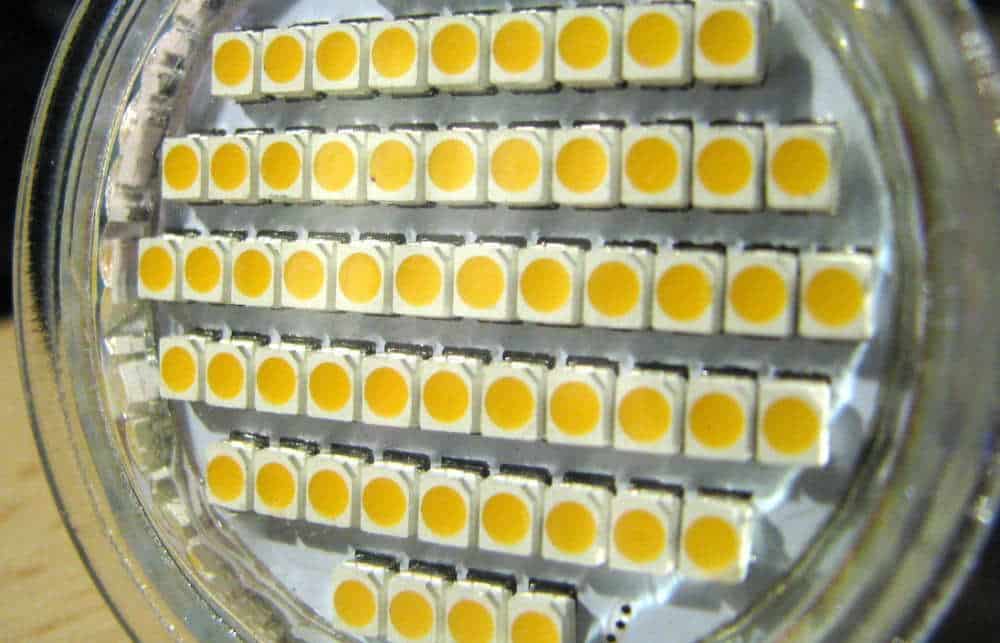 LED bulbs are the most common modern light bulbs. LED stands for Light Emitting Diode, which means that LED is actually semiconductor (diode) and not a bulb like most people think. These tiny semiconductor elements emit light when electric current goes through.

A diode is a semiconductor device with two terminals. Typically, LEDs allow the flow of current in one direction only. The current comes into an anode (+ positive) and flows out of a cathode (- negative). They don’t use a lot of electricity to emit the light, and that is the reason why they are so efficient. More than that, LEDs don’t even have wire filaments like a lightbulb does, and they last more than regular light bulbs.

Today’s LED bulbs are producing light by using one or more light-emitting diodes inside.

Unlike the most fluorescent lamps, LEDs come to full brightness immediately with no warm-up delay. They are the most used modern light bulbs and there is more than just one reason for that. In this post we are going to explain how LED works, why these bulbs are efficient and what is the difference between Lumen and Watts?

How does an LED bulb work?

An LED bulb produces light when the electric current is passing through the semiconductor material. Semiconductor is also known as diode. Yes, LED is a type of diode which can produce light. LED emits photons (light) through the principle of electroluminescence. On the other hand, an incandescent light bulb works by passing electricity through a small wire, or filament. In comparison, LEDs have big advantages. They last long, and they use much less energy than incandescent bulbs.

How do LEDs save energy?

LEDs use much less energy than incandescent bulbs and that is why diode bulbs are much more efficient. They do cost more money, but they save your money in the long run. Keep in mind that LEDs last much longer than usual bulbs, and that they use less energy.

LEDs can save up to 75% of energy used. While they bring light into your home, LEDs can save up to 75% electrical energy if they are compared to regular bulbs. Some types of LEDs can go even further, for example LED flood lamps. They use just about 11-12 Watts while creating light output. If we compare a regular incandescent bulb, for the same amount of light (Lumens) a regular bulb uses 50 Watts. Later on, we are going to explain the connection between Lumen and Wattage.

Thing you should know is that LED light bulbs are much brighter than incandescent or halogen bulbs of the same wattage. The bad thing is that LED bulbs are not available in high wattages. However, using more than one LED in a light bulb we can make that light bulb shine just like a regular incandescent bulb. By using multiple LEDs in a bulb, we are still saving a lot of electrical energy. For the same amount of Lumens, LED can save up to 75% of eclectic energy. Let’s explain and compare Lumen with Watt.

Take a look at the chart and see the connection between Lumens and Wattage. This chart illustrates the amount of brightness in lumens you can expect from different wattages of light bulbs. Chart is the best way to see how much less energy is required for some specific amount of lumens when you are using LEDs.

You can compare LED vs CFL or Incandescent light bulbs. Chart describes why LEDs are more energy efficient.

Inside the Lumen and Wattage chart you can also read the lifetime period for each light bulb type.

To understand the difference between Lumens and Watts, first you need to know that Lumens are telling us how bright a light bulb is. No matter the type of bulb, Lumens are presenting the value of light. The more Lumens, the brighter the light is. As you can see in a chart, LEDs have more Lumens with a smaller number of Watts. That is good and shows us how energy efficient actually LEDs are.

Related Topics:LED lightLight bulb
Up Next