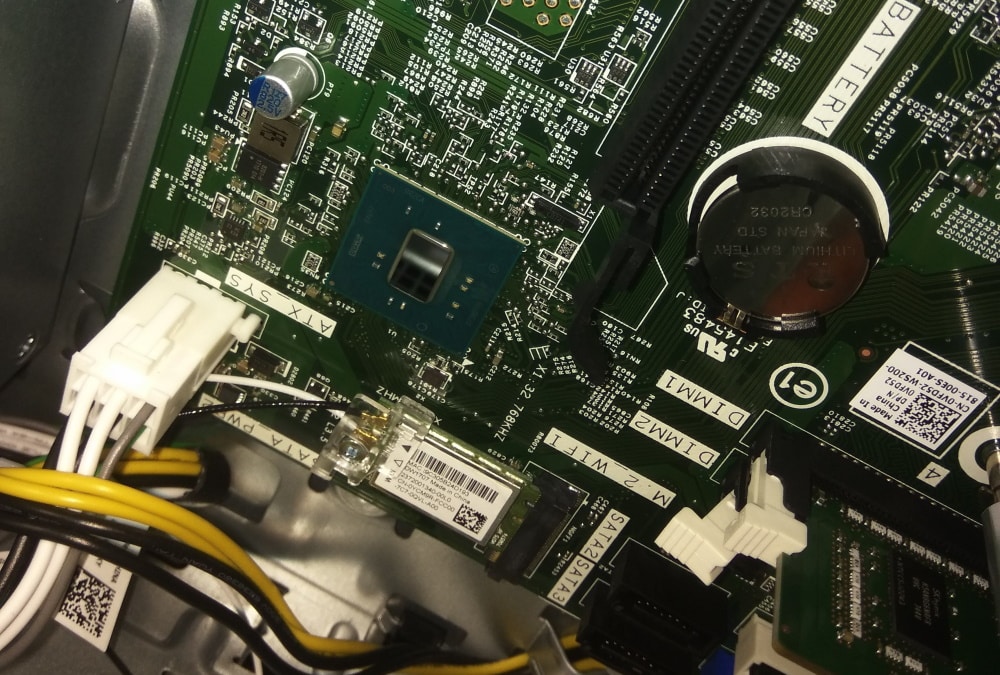 Small BIOS battery is also known as a Button cell, CMOS battery, coin battery, etc… Most modern computers are using the CR2032 battery model on their motherboards. CR2025 and CR2016 models are used inside remotes and mostly in modern quartz watches.

Small coin shape batteries are hard to distinguish on a first look. However, there are some crucial differences.

In a modern computer most likely you will find the CR2032 coin battery model. This battery’s main purpose is to keep BIOS settings, even if the computer is unplugged. A small battery can operate for a long time in that kind of environment. They can last for 5 years or more. Still, sometimes we need to replace the battery from the motherboard, to avoid seeing BIOS warnings while the system is booting.

Replacing batteries on the motherboard is quite easy. You need to prepare a new battery, take out the old one, and firmly place a new CR2032 battery.

If you look at the table above, the diameter is the same for all 3 models, while the high size is a bit different for each model. Fortunately, the BIOS battery is the biggest one and we can use another CR model if necessary.

Changing BIOS battery, which one to choose?

While approaching this problem, we all want to replace the current battery with an appropriate one. However, sometimes we start doing replacements without preparation.

If you are stuck with opened computer housing and don’t have exactly the battery model you need, try to use one of the battery types which is close enough.

To avoid loose contact, before placing a new battery, just do a slight pressure on the positive terminal. That way the battery should fit. It depends on which CR battery model you are using, the contact terminal needs to be appropriately prepared.

Two battery models are different in size and nominal capacity. CR2032 is the strongest, and the biggest one. However, if needed, you can try placing CR2025 instead.

Keep in mind that you need to prepare CMOS battery housing, and avoid loose contact. Try booting your PC and see if you get rid of error messages on boot.

Note: CR2032 nominal capacity is 220mAh, compared to CR2016 which has only 90mAh. This means that CMOS can still give an error message (warning) to replace the battery with a new one.

This battery may be sufficient to keep saved settings inside your PC BIOS, but sure it will trigger a warning message on low voltage very soon.

To be sure, if changing the CMOS battery, try to buy an appropriate model and replace the old battery with a new one. Only if you don’t have a spare battery (CR2032), you can try to place a CMOS battery with CR2025 or CR2016. This should work, but there is no guarantee. Finally, if you manage to replace the battery successfully (with CR2025 or CR2016), make sure to buy an appropriate model soon (CR2032) and replace that battery once again.

If you are looking for laptop CMOS battery

Take a look at these models of laptop CMOS (BIOS) coin batteries.

Each model has 3V, but sizes vary.

They all have 3V output and look the same at first sight. Differences between these models are in size and nominal capacity. CR2016 is the smaller one, thick only 1.6mm, providing only 90mAh. CR2025 is a 2.5mm thick battery, with a 165mAh capacity. The last, and the strongest (biggest) one is CR2032 providing 3V and 220mAh capacity. This battery is 3.2mm thick.

Conclusion: battery model represents diameter size 20mm and its thickness 1.6mm, 2.5mm, and 3.2mm. Hope this post will help you to decide on which battery to choose.

Battery size for CMOS is CR2032

This is mostly used battery type in modern desktop computers. Still, make sure before ordering a new battery for CMOS.

Here we can’t really know for sure. Watches come in many sizes and vary a lot. Maybe it is the best option to visit the watch service.

If you want to choose a battery CR2025 vs CR2032 keep in mind their thickness and nominal capacity. Always try to find an appropriate battery model, and only in case you can’t, try to use (appropriate replacement) the closest one instead of the original one.

CR2032 battery and CR2025 are not the same. Still, sometimes one coin battery model can replace another. Good to know is that CR2025 and CR2032 are the same as DL2025 and DL2032. The CR and DL are equivalent, and if the numbers are the same batteries are also the same.

As we wrote already, CMOS needs a battery to power the CMOS memory (BIOS configuration settings) when the computer is turned off. There are many configuration settings there, but one of the most common is time and date (also called Real Time Clock). RTC stands for Real-Time Clock, and computers can give you an error message saying the CMOS battery is low, BIOS battery low or RTC battery low.

That means that if the CMOS battery in a computer or laptop dies, the user gets an error message. The machine can’t register the exact time and date, and that is why the error message appears. Simple as that: The machine is unable to remember its hardware settings without a coin battery, which could cause problems with the day-to-day use of the computer.

Top 5 Handheld gaming consoles you can buy in 2020